Right now it’s hard to imagine that we used to live in a land where Bayern and Bob Baffert and the Santa Anita stewards had not ruined horse racing for everyone, but I’ll give it a go anyway.

Sure, it seems like a stretch. That we could all just somehow drift back to a kinder, gentler time. Before Martin Garcia and Bayern conspired with the dastardly Bob “Dr. Evil” Baffert to take out both Shared Belief and Moreno (VE Day being collateral damage) just to win a horse race worth five million dollars! 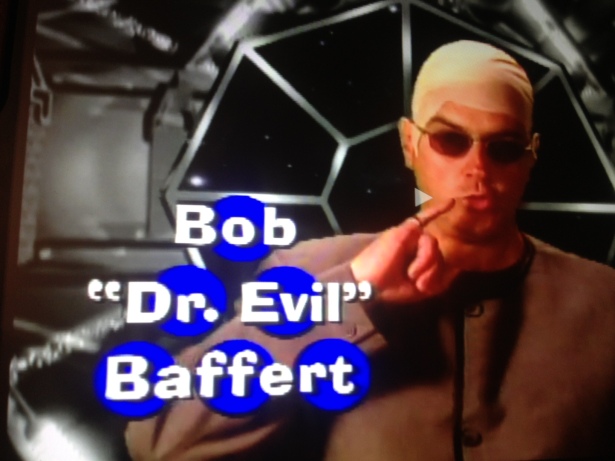 So the plan here is not merely to take back, but to back out of the gate entirely. To go back to that blissfully ignorant time before (seemingly) anyone knew that in order to get DQ’d for veering in or out at the break in California you basically had to unseat a fellow rider. Besides, here at around2turns we object not only to the beating of live horses but also of dead ones. Moving backwards in time then, here are our favorite stories from Breeders’ Cup week at Santa Anita.

Doughnuts for Europe – Ichiban for Japan 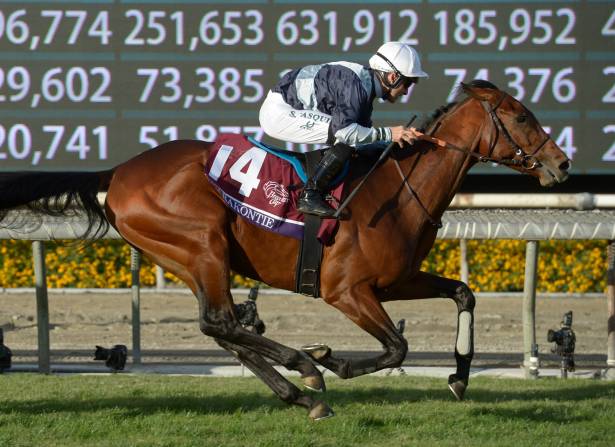 One year ago was a great Cup for Europe, where European-bred horses filled out the exactas in the Turf and Juvenile Filly Turf, and the trifecta in the Filly & Mare Turf. But this year’s twenty starters bred in Ireland, France or England failed to win a single race. If that weren’t bad enough, two American-bred trainees of Wesley Ward, both of which ran very well across the pond (No Nay Never and Undrafted) ran 2-3 in the Turf Sprint. But perhaps the greatest shock to the Euro Zone came when Karakontie became the first Japanese-bred horse to win a Breeders’ Cup race by overcoming the dreaded quatorze hole to pick up all the pieces of a pace-shattered Mile.

Japanese race fans did not get their Arc this year, but this grandson of Sunday Silence gave them a French Classic (the Poule d’Essai des Poulains) and a $62 win mutuel at the Breeders’ Cup, which, where I come from, still buys some pretty effective forms of consolation. Group one winners’ circles might continue hearing the words “… out of the Sunday Silence mare …” for a few years yet to come.

Apparently, Rosie Napravnik never got the email about the Distaff being returned to its rightful moniker and that Breeders’ Cup Friday is no longer the “girly ghetto”. Otherwise, why else would this great female rider give up the lavish income she has earned – with nearly $40 million in purses over the last three years – only to kowtow to the patriarchy by taking on the subservient and culturally-imposed roles of doting mother and supportive wife?

Kidding! We signed on to the nice tweet sent out by NYRA handicapper/human-piñata-of-the-Twittersphere Andy Serling.

I have great respect for people that value quality of life over money. @rosienapravnik remains one of my favorite @AtThePostLive guests.

Napravnik’s $13 million in purses for 2014 is surpassed today by five jockeys and only two trainers. Her husband, Joe Sharp, just launched his training career and is off to a great start, having won 9 of his first 20 races, with 14 in-the-money finishes. Still, this leaves him 1,268th in purses, so we wish him well in his quest for more and better and faster horses. And with DRF Formulater informing that Rosie was in the irons for 8 of those wins, we also wish him well in his search for a new jockey.

But there is something about this Joe Sharp that tells me he is aptly named, and that he and Rosie will be just fine.

What People of My Generation Learned by Watching “10”

From the statement issued by Dennis O’Neill, brother of suspended trainer Doug O’Neill:

I understand her bias and dislike for Doug, but to take that out on Leandro and the owners of this magnificent horse and this amazing achievement on this day, show a complete lack of character. If members of this committee cannot contain themselves with their utter disdain at Goldencents winning, could we not find someone who could have at least faked it?

To answer O’Neill’s rhetorical question: in that town, yes, I think they could have managed.

Third Time is the Charm

My favorite story from Breeders’ Cup week came very early in the week, when Ray Paulick retweeted the news that Silver Charm had been pensioned from stud duty in Japan, and would be coming home to live out his days at Old Friends in Kentucky. Paulick’s source was Kate Hunter, who is shown below with the 20-year-old champion.

I got to spend a few hours with the champion last week. I have visited Silver Charm every year since coming to Japan pic.twitter.com/JBHWm0GZDB

As most racing people know, the two Kentucky Derby winners who preceded Silver Charm at stud duty in Japan – Ferdinand and Sunday Silence – did not enjoy happy retirements, nor even merciful endings. Presumably because of these sad stories, it seems that Silver Charm’s sale included a buy-back clause.

Another tweet from Hunter noted the persistence of memory, and for how long grudges can be held.

@peterberry57 @AmandaBry91 Every time a horse is sold to Japan, forums explode with hateful words about Japan. I hope we can start to mend

I understand the concept of remembering the past so as to avoid repeating it, but there also comes a time when righteous fury must be dissolved in love and forgiveness, rather than in hatred and anger. It’s nice that Americans care about their animals, and that the best ones and the luckiest ones seem to find graceful and happy places to live out their days. But what about our racehorses who are unable to find second careers or who fail to “earn” their way into a comfortable retirement? Until we figure that one out, we would be well advised to first examine our own house, and to keep our perceived moral superiority on ice.