Most years the Kentucky Derby favorite is just that – the three-year old with the most money in the win pool. Some years the favorite is a standout, and the question is how low the odds will go in in a race that can often resemble a mile-and-a-quarter-long pinball machine (Big Brown in 2008 is perhaps the most recent example – he was just a bit shorter than 5/2 when starting from the outside gate). And every once in a great while a horse comes into this race as not just the favorite, but as the chosen one. A super-horse. A legend in the making. One for the ages. A horse like American Pharoah.

But relatively recent history informs us that these short-priced legends in the making frequently become unmade in the Kentucky Derby. Sometimes a really great horse simply picks the first Saturday in May to throw a clunker (Holy Bull and Point Given come to mind). Sometimes a horse is able to establish a sterling reputation on what are later deemed to have been dubious or irrelevant credentials (see Arazi and Mister Frisky). And every once in a while a horse is anointed as a can’t miss Derby winner out of an abundance of raw talent, an even greater abundance of hype, and a curt dismissal for the chances of some legitimate competition.

The “relatively recent history” cited above begins in 1989, which was when I first started paying attention to horse racing. Up until then my warm weather nights and weekends had been spent mostly in the fragrant upper deck of Yankee Stadium, or on the softball fields of Central Park’s North Meadow, or downtown along the East River, or within the friendly confines of J.J. Walker Field in the West Village. 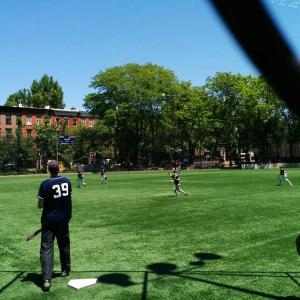 But I was drifting away from baseball. A key moment came late on a Saturday afternoon in early April in the midtown offices of Sports Illustrated magazine. Two of my best friends worked there and had invited me to join their team in the magazine’s rotisserie league. Late in the too-long process of drafting players a sportswriter reappeared in the conference room with some very important news: Easy Goer had just broken Aqueduct’s track record for a mile in the Gotham Stakes.

[I may not have realized it at that moment, but this fish was hooked. And by the time that ridiculously entertaining 1989 racing season had ended, I knew it was for life.]

What little I knew of horse racing in those days came from being a regular reader of the New York Times, whose racing writer – impossible as this may seem today – was a youngish, astute, shaggy-haired fellow by the name of Steven Crist. After Easy Goer romped again two weeks later in the Wood Memorial, Crist wrote the story pictured below and for the first time in my life I really cared who won the Kentucky Derby.

It didn’t matter that Easy Goer would be a short-priced favorite. Crist’s smart and funny analysis had convinced this neophyte that, for this year anyway, the Derby favorite was sure to win. Even if I didn’t know Charlie Whittingham from Charlie McCarthy. Or that Easy Goer had faltered on a muddy Churchill Downs racetrack the previous fall. Or that risking dollars to win dimes was not an effective strategy. Or that I should never fall in love, even with a big handsome fellow like Easy Goer (anyhow, it was already too late for that).

At that time the nine-year streak of losing Derby favorites was the record. That stretch of betting favorite futility would grow to twenty before Fusaichi Pegasus finally broke the string in 2000. In those early racing days I bet on a lot of favorites and short-priced horses, so Kentucky Derby days in the early-to-mid-nineties typically ended in disappointment and torn up tickets.

As the string of losing Derby favorites continued I finally woke up and started playing longer-priced horses but failed to land on any winners. And sure enough, when the trend reversed and favorites started winning the Derby at a more regular rate (since 2000 favorites have won the Derby at a 40% clip, and they are four for their last eight), this coincided with a new-found stubborn insistence on betting price horses and tossing the favorite, period. Accordingly, the Around2Turns Derby ROI is unenviable (consider yourself forewarned).

This year’s questions on who to toss and who to use are as vexing as ever. A wise horseplayer on the Thorograph board summed up the 2015 Derby succinctly:

“TOUGH year with many more variables than usual and what to do with AP? Is he Seattle Slew or a toss?”

This seems to be the question. Is American Pharaoh the second coming of Seattle Slew? Or maybe he’s an over-hyped (if smartly campaigned) morning glory whose armor might crack once/if he finds out there are other three-year-olds who can in fact run with him.

If this seemed to be an ordinary crop of three-year-olds it might be easier to believe the hype and start figuring out the minor parts of the triple and superfecta, but the quality of this Derby field extends far beyond the favorite. How can you not consider a strapping, undefeated Santa Anita Derby winner trained by Bob Baffert? Or another undefeated speedball capable of winning the Florida Derby in only his third lifetime start? Or a runaway Bluegrass Stakes winner whose only loss was a second place finish in the Breeders’ Cup Juvenile? Or a tough-as-nails New York-bred who has danced every dance and has run more fast figures than any other Derby contender?

While it is possible that American Pharoah is every inch the superstar that all those early-risers at Clocker’s Corner believe him to be, let’s also remember the basis for his lofty reputation. He works better in the morning than anyone since Katie Couric. In the afternoons of his 3-year-old season he has run away and hidden with contemptuous ease from the likes of Madefromlucky and Mr. Z. He has beautiful action and seems to float across the racetrack and does not seem to get tired despite all his brilliance.

What American Pharoah does not have are speed figures that truly set him apart from several of the other top contenders. When Big Brown won by daylight in the 2008 Derby his fastest Thoro-Graph figure going into the race was roughly three points better than his closest competitor. While American Pharoah did run a big figure while being geared down in his Arkansas Derby romp, he will be facing three others in the Derby who have run faster (on Thoro-Graph figures), and several others who are within range with a point or two of improvement. American Pharoah is one lousy post position or one serving of bad racing luck away from being an extremely vulnerable 5/2 Kentucky Derby favorite.

So while the quality and depth of this Kentucky Derby field make American Pharoah seem like a somewhat shaky 5/2 choice going in, it could also make for an extremely compelling story coming out. If he can take on everything that Materiality and Carpe Diem and Dortmund and Upstart and Frosted and the racing gods throw at him and still come out on top, American Pharoah will have proven the myth makers and clockers correct. Which is just what the world needs: One more reason to believe the hype, and yet more evidence for the value of waking up early in the morning.